Mahasthan, the earliest city of Bangladesh

Located along the road towards Dinajpur in the Sibgonj thana of Bogra district, the village of Mahasthan entrenches the remains of one of the oldest city of Bangladesh, known in the pre-Muslim period as Pundranagara (= "the city of the Pundra", a tribe mentioned in the Veda). In the modern period (ca. XIIIth-XVth cent.), the name changed to Mahasthan (= "the great/ or sacred place").

The site, partly hidden under thick jungle, was discovered in 1879 by Sir Alexander Cunningham. Occasional explorations took place during the late XIXth-early XXth cent. (especially at the site called Khodar Patar), and regular excavations were undertaken in 1929 by the Archaeological Survey of India (clearing out of several portions of the city wall, of two Hindu temples of the Pala period/9-11th cent at Bairagir Bhita site). At the same time, the historical framework of the city was clarified by a renown scholar from Rajshahi, P.C. Sen.

New excavations were carried out on the site from 1961 to 1968, under the direction of the Bangladeshi archaeologist Nazimuddin Ahmed: the results were summed up in a booklet published in Dhaka in 1975 and still available in town. The Directorate of Archaeology of Bangladesh undertook also several excavations (Northern and Eastern rampart, Mazar area) and conservation operations (Eastern Gate, Northern Gate). Some other sites were also excavated in the vicinity of Mahasthan.

Since 1993, a Bangladesh-France joint venture is carrying out annual excavations on the site. A first programme (1993-1999) was intended to discover the chronology of an area close to the Eastern rampart: a First Interim Report on the scientific results was published in Dhaka in 2001, providing a detailed stratigraphy from the late IVth cent. B.C. to the XIIIth cent. A.D. and preliminary studies on different artefacts (pottery, coins, beads, etc.). Since 2001, new excavations are being carried out in the Mazar area, near the South-Eastern corner of the ancient city : new buildings have been brought to light, especially a large pillared room the function of which remains unknown, and beautiful defensive devices: two rampart-walls, a city gate with bastions, a paved access road, a protruding fortified bastion, etc. The latest discoveries provide evidence of a siege of the city, with sapping trenches by the attackers, probably at the end of the Pala-Sena period. For protection reasons, the ruins cleared out during each annual campaign are covered anew with earth at the end of each season.

The most visible aspect of the ancient city is its rampart-wall, more than 1,5 km long the North-South axis and 1,3 km on the West-East axis ; it raises up to 15 m in places, and several well-built gates can be seen along its course. Made exclusively of baked bricks, the rampart was re-built several times throughout the long history of the city; in its earlier phase, it was most probably built as a protection against floods.

Inside the city-wall, several buildings have been discovered by the archaeologists, although most of them have now disappeared under vegetation and silt. From South to North, one should mention: well preserved public buildings and temples in the Mazar area, from the 14/15th century to earlier periods, as shown by the current Bangladesh-France excavation; the massive basalt threshold of a Hindu temple at Khodar Patar ; a mosque (14th cent. ?) at Mankalir Dhap; the Jiyat Kunda well, supposed to give new strength to men; the "Parasuram" buiding, which likely is thought to be a Mughul residence (XVIth cent.); the Hindu temples at Bairagir Bhita, the domestic area near the Eastern rampart recent excavation; the Munir Ghon bastion on the East side of the city-wall; the protruding buttress on the North-Eastern rampart; and lastly, the restored Govinda Bhita temple outside the rampart to the North.

All these remains belong to various phases of the history of the city. It was founded around the end of the IVth cent. B.C. (radiocarbon dating), and a Sanskrit inscription in Brahmi script on a small stone slab informs us that it was part of the Mauryan empire in the IIIrd/2nd cent. B.C. Close relations with the Ganges Valley are attested by a typical pottery called Northern Black Polished Ware, by terracotta figurines and punch-marked coins. A bronze mirror and other objects provide evidence of contacts with North-Western India.

The city flourished from the IInd cent. B.C. to the IInd cent. A.D., but without any historical reference for the so-called Shunga-Kushan period : large houses with tile-roofing were uncovered in the Eastern rampart area, together with a large number of finely decorated terracotta figurines (yakshi-yaksha, with exuberant decoration).

Although attested by a couple inscriptions, by historical sources and by the some stone sculptures, the Gupta period (IV-VIth cent. A.D.) is poorly represented in the archaeology of the site. The city flourished again in the Pala and Sena period (VIII-XIIth cent.), when texts mentioned Pundranagara as the capital of the Pundravardhana (Varendra) province. It was also an important stop on trade routes leading to the East (Assam, Burma, Chinese Yunan) and to the Bay of Bengal to the South.

After the Muslim conquest of Bengal in the early XIIIth cent., the city lost its role of capital: it was nevertheless occasionally occupied through the centuries, as attested by the mosque and the tomb of Shah Sultan Mahisawar (XVIIth cent.).

Several major ancient sites are dispersed in the vicinity of old Pundranagara, such as the Buddhist monastery and temples at Vashu Vihara, the temple at Gokul Medh, the sanctuary at Mangalkot, the temple at Godaibari Dhap, etc. These sites need to be preserved and consolidated.

A small museum at Mahasthan exhibits some important archaeological objects from the Mahasthan excavations and from chance finding in the area.

France and the Promotion of Archaeology Abroad 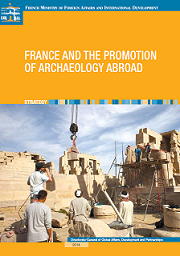