Reading Jules Verne’s "Around The World in 80 Days" gave me the idea of becoming a world traveller as well. Art, Travel and Language. It’s Alliance Française de Chittagong who made me realize the golden triangular of the three desires of mine. 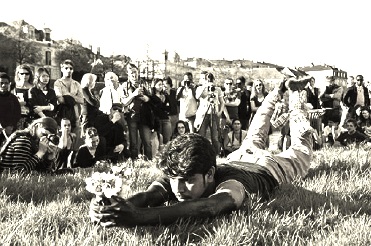 When I was in secondary school I once read an article about the culture life in Paris. And subconsciously I had fallen in love with French Arts and I then cultivated a secret desire to study fine arts and to live through art. Later, reading Jules Verne’s "Around The World in 80 Days" gave me the idea of becoming a world traveller as well.

After I met with some friends who had been studying French language at Alliance Française de Chittagong, I decided to learn French immediately. Once a student of fine arts at CU I became more and more enthusiastic about the idea of discovering France.

Since 2010 I have been learning French at Alliance Française de Chittagong with the support of highly skilled and caring foreign and local teachers in a very professional environment. After Bengali I find that, French is one of the sweetest language in the world. We don’t only speak French but also “make one” with the language while speaking. And very recently I was given the opportunity to teach French at Alliance Française as a trainee.

Art, Travel and Language. It’s Alliance Française de Chittagong who made me realize the golden triangular of the three desires of mine. This year Mr. Raphaël Jaeger, Director of AFC, selected me to spend a three-month residency in France at Fine Arts Institute of Besançon (ISBA) according to the MOU signed between AFC and Mr. Laurent Devèze, Director of ISBA.

For me It was an extraordinary experience to travel to France and Switzerland through art and culture, speaking French 24 hours a day! It was an amazing feeling to be in front of the old masterpieces and contemporary legendary artworks at the museums of Paris, Ornans and Lausanne. The moments I spent at ISBA were full of artistic activities. There were plenty of exhibitions, discussions, conferences, philosophical discourses I attended and participated in. I shared and exchanged with students and artists from all over the world, experiencing all together nightlife and a lot of parties as well where I made new friends.

My first stay is over as I have just returned but my journey to know more about French culture is not finished yet! I am now looking forward to applying to a Master Program at the same school in the near future thanks to the extensive support of Alliance française and the Embassy of France in Bangladesh. Before that, I am eager to welcome the next artist from ISBA who will come in residency in October and I am planning to make him feel as jubilant as I was during such a unique experience that I recommend to anyone who is willing to think out of the box and gain international opportunity.