Speech of the French Ambassador. 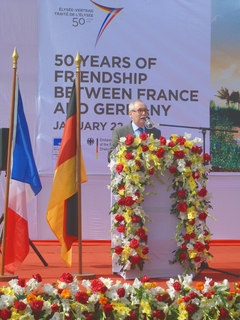 Honourable Hasanul Haq Inu, Minister for information of the People’s Republic of Bangladesh,

Dear colleagues from the diplomatic corps,

Welcome to all of you, to this celebration today of the 50th anniversary of the Elysée Treaty, which was signed on January 22nd 1963 in Paris.

It was indeed, half a century ago, that the then French President, Charles de Gaulle, and the German Chancellor, Konrad Adenauer, signed a treaty to establish a strong and longlasting partnership between their two countries.

This fundamental agreement for the relations between the two former enemies was not only the symbol of their reconciliation, after several wars that had taken place in the past, but translated also the desire to move towards the future, by setting up mutual understanding and closer ties, in the mutual interest of the two nations and for the benefit of the European continent as a whole.

This reconciliation and this cooperation have indeed been conceived from the outset as the corner stone of the European construction and integration, as it has appeared through the key role played in this matter by the two countries until then.

Today, the aims that the two signatories of the Treaty had set up have been widely reached : Germany and France are for each other major partners at the political, economical and human levels, not only within the European Union, but outside as well.

In Dhaka, today, this 50th anniversary is particularly a symbol, as it illustrates a closer relationship which gives us the occasion to lay the first stone of the building that will accommodate our two Embassies.

Before leaving the floor to my colleague and friend the Ambassador of the Federal Republic of Germany, I would like to thank you again for joining us today to celebrate the anniversary of one of the most important events in the recent history of our two nations.