On 25 February 2016, the Embassy of France organized a workshop around COP21 follow up towards COP 22, under the title "Path & Challenges towards COP22"

As you know, French COP21 presidency will continue until 7th of November 2016, the starting day for COP22 taking place in Morocco until 18th of November 2016. As said by Atiq, the goal of my intervention will be to present the way France sees the content of its presidency for the current year.

As for France, we will have four priorities for 2016, three of them remaining our priorities beyond 2016. • First, Paris agreement signing and ratification ; • Second, preparation of the necessary decisions to implement the Agreement ; • Third, carrying out the immediate Pre-2020 actions to support our global action against the increase of climate temperature, including Lima-Paris Action Plan ; • And Forth, carrying out our mission as COP21 presidency, in close relation with Morocco to prepare COP22.

You will observe that the French inter-ministerial team dedicated to preparation of COP21 remains the same for the coming year. The reason is that we want to keep on working following the same comprehensive and inclusive way which was a main priority for us in 2015, and our diplomatic network will keep fully committed to the success of COP22. The Paris’ spirit of our climate diplomacy will guide our action in 2016.

Coming back to our priorities :

1-The first one is the signing and ratification process of the Paris Agreement. The Agreement must be signed and ratified as soon as possible. At least 55 countries are expected to sign and ratify this agreement and they have to represent at least 55% of the greenhouse gas emissions. The signing ceremony is planned to be 22nd of April in New York and it will be hosted by the UN Secretary General. The French President of the Republic and the COP21 presidency will be present and as the Presidency, our diplomacy will work in order to convince the parties to be present at the highest level in order to sign the Agreement. The goal is to reaffirm the political will to sign the Agreement and to launch the ratification campaign as soon as possible. The real challenge will be to get at least 55% of the GHG emissions, because we are all convinced that if we get the support of the big emitters, then the movement will be launched and most of the Parties will follow the dynamic.

France wants to be exemplary and my country will take all the necessary measures to be in a position to conclude the ratification process before COP22, even if we are conscious of our constraints : because as you perhaps know, for European countries, the ratification process will not be fully carried out before all the EU members have finalized the process. But we will do our best to push the process at the European level.

Some of the decisions to be implemented are technical ones. But some of them are very political : for example, the 5-year review of the contributions, the transparency mechanism regarding commitments, or regarding funding… This is why Paris has decided to host an informal consultation, 4th and 5th of April, in order to have all the negotiators present at a ministerial level and to prepare the Bonn meeting.

Let me give you a few important examples of the decisions to implement : • The Agreement sets a very important principle which is to assess the collective efforts every five years - I mean the nationally determined contributions and their accompanying information. We must now specify the modalities of such stocktake : what to assess and how to assess it. • We have established a global goal on adaptation in the Agreement. But we must now facilitate the mobilisation of support towards adaptation and modalities to regularly assess the adequacy. • We have adopted an enhanced "transparency" framework to monitor actions and support. We must now define the specific rules and details of this framework.

To sum up this point, it is essential to define the implementing details as soon as possible, because this is the only way for the Parties to have an operational vision of their obligations, after 2020.

This year will also be very important to make progress on mitigating emissions in sectors that fall beyond the scope of Agreement : I mean the airline and maritime sectors, and Hydrofluocarbures, HFC. These issues are designated as additional processes. In 2016, the International Maritime Organization (IMO) and the International Civil Aviation Organization (ICAO) are expected to achieve satisfactory and timely results to reduce Greenhouse gas emissions from ships and planes within the framework of the “Montreal Protocol related to substances posing a threat to the ozone layer”.

This slide describes the main events taking place in 2016 : from Abu Dhabi and its Sustainability week in January, then Davos, to the negotiators’ dialogue summit in Tokyo,. And as underlined, the informal consultations in Paris before Bonn, the Climate action Day 22nd of April with Ban Ki Moon, the Petersberg dialogue in Berlin, the Autumn Assembly of the World Bank group, the non-state Actors summit in France…

This other slide shows the different steps to achieve, regarding the global stocktake, which is the global inventory of the measures which will be proposed and discussed by 2023 in order to keep the target of the 2° C in the second part of the century. In 2025 new commitments will be made for the 3rd time and, depending on the progress made then, a new global stocktake will take place in 2028.

3. Our third priority regards immediate actions : Pre-2020 actions, PLAP The Paris Agreement sent to businesses, investors, local governments and citizens the strong signal they were waiting for in order to strengthen their commitments towards low carbon economy. Paris text endorses the Lima-Paris Action Agenda (LPAA) and supports the initiatives taken by all the public and private actors like cities, regions, companies, investors, citizens. To give some examples : • Around 10.000 stakeholders, which are major cities, regions, companies and investors from around the globe have promised, I quote, to “quickly and effectively help implement the Paris Pledge for Action and speed up the transformative changes needed to meet the climate change challenge.” • 230 bn$ decarbonized investments is the sum of the investments promised in Paris, dedicated to renewable energies. • The different initiatives of 290 organizations which have in charge river basins all over the world, such as the International Network of Basin Organization.

But endorsing is not enough. We want to make sure that the implementation will be seriously followed up. That’s why the Agreement also called for the nomination of two "high-level champions" by the current and coming presidencies, whose main task will be to strengthen the mobilization of non-state actors and follow the development of their initiatives. France has designated Ms Laurence Tubiana to assume this responsibility. This mobilization must not only be maintained but amplified in 2016. Initiated projects must be implemented as soon as possible, and new initiatives from all sectors must emerge and be supported. The mobilization of the private sector will contribute to the necessary reduction in emissions by 2020 and play a central role in strengthening our collective ambition. Financial flows must be gradually redirected from high-emitting sectors, especially the fossil fuel industry, towards the low-carbon economy, so that the cost of clean technologies goes down. These actions will in turn change the technological and financial conditions that will make it possible for governments to develop meaningful climate policies and present every time more ambitious national contributions. This is the spirit of the Paris Agreement : to create a dynamic framework that enables everyone to act and ultimately transform not only our economic models but also in fact, our societies.

COP 22 in Marrakech will be a key to assess and reinforce pre-2020 action.

4. Our fourth priority regards the way we will conduct our Presidency, towards COP22. Our official Presidency has just started. Throughout the year, we will maintain an open dialogue with the Parties and between the Parties to set the necessary implementation work on the right track.

We will work closely with the incoming Moroccan Presidency towards COP22 as the Peruvian Presidency did with us. In coordination with COP22 Presidency, we will organise informal meetings that will bring their contribution to the formal negotiations that will take place in Bonn.

In the coming months, COP Presidency will gather the main stakeholders of the Lima-Paris Action Agenda to define the next steps and enable further action.

We will follow-up closely the implementation of our bilateral commitments and of the initiatives that we support, in particular : • Increase of our climate finance commitments (from 3 to 5 billion euros per year by 2020), • African Renewable Energy Initiative (with a bilateral commitment of 2 billion euros between 2016 and 2020), • CREWS initiative on climate risk and early warning systems (France will contribute to 10 million euros in 2016-2017), • the “Innovation Mission”, • Support of initiatives on forestry such as the Central Africa Forests Initiative (we will contribute to 3 million euros out of 20 million in 2016).

We also want to gather all the stakeholders of this historic Agreement for a first anniversary on December 12, 2016. In short, we will do our best to be the custodians of the spirit and letter of the Paris Agreement./. 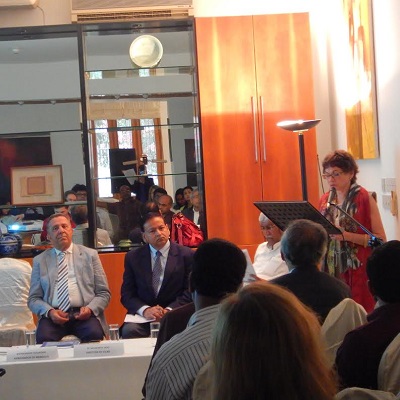