National Day of the French Republic - 2019

Allocution by the French Ambassador to Bangladesh, HE Mrs Marie-Annick Bourdin, on the National Day of the French Republic (Dacca, 13/7/2019) 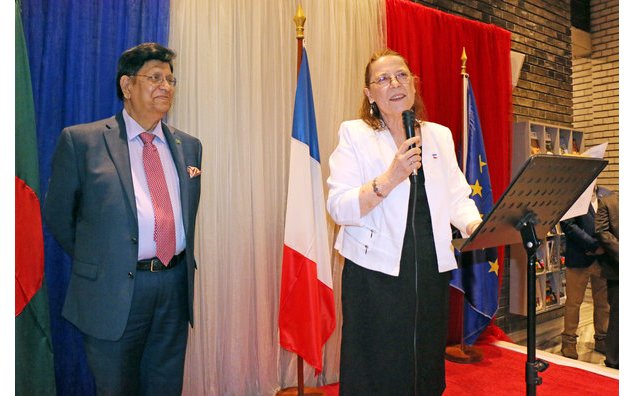 We are very honored to welcome all of you this evening to celebrate our National Day, in the premises we share with our German colleagues since 2 years. This joint location is both a witness and a factor of the growing cooperation between our 2 teams and 2 countries.

The storming of the Bastille by the people of Paris on the 14th of July 1789 is the symbol of the French Revolution, leading to the end of our monarchs’ absolute power and to the anchoring of the Enlightenment ideals, of freedom, equality before the Law, in our Declaration of the Rights of Man and of the Citizens adopted on the 26th of August.

We are indeed happy and proud to share this symbolic historical and political legacy with all our friends in the world. We are proud to know that our fight has served, and still serves decades later, as an inspiration. Many friends suggested to me that the Father of the Nation, Sheikh Mujibur Rahman, also drew conviction and strength from our Revolution. His strong political and human plea galvanized millions of compatriots, and in turn mobilized international support, including André Malraux, former Minister and Freedom fighter, who forcefully called for support to Bangladesh’s fight for independence.

Beyond the proud legacy I evoked, let me stress that the pendulum of France’s political history has been tainted in blood and has swung widely before a gradual stabilization by the end of the 19th century. Let me also recall that the principles of Liberty, Equality and Fraternity did not apply to half of our citizens : despite taking part in many fights, women remained treated as dependent minors. It is only in 1944 that French women won the Right to vote; they had to fight until the 1970’es to be able to decide for themselves. We need to do more to combat prejudice and progress towards Gender Equality for all, all over the planet.

We must admit that the path to accede to Democracy and Human Rights, Emancipation and Social Justice, is a process, unfinished and at times exposed to proportionately violent setbacks. The consolidation of the Rule of Law in our respective Constitutions and its enforcement by effective national institutions requires a strong commitment and solidarity from all of us, individuals and countries alike. We all have learnt, the bitter way, the price of wars and conflicts. Our leaders have committed to preventing the cycle of violence and crises, and consolidating peace, through international cooperation. Managing to preserve the sovereignty of our respective States, our Governments have agreed to the principle of mutual concessions, and succeeded in elaborating a comprehensive set of shared multilateral principles and rules, institutions, which are both binding us and assisting all of us.

Our President reaffirmed France’s attachment to multilateralism during 3 major commemorations this year : on the hundredth anniversary of the 11th of November 1918 Armistice which marked the end of the 1st World War, a number of Heads of State and Government came to Paris to reaffirm their solidarity and commitment to peace; Bangladesh was also present to the ceremonies and to the ensuing first “Paris Peace Forum”. On June 6th, we celebrated the 75th anniversary of the DDay, the courageous disembarkment of Allied Forces in Normandy. Last 22nd January, building upon the Elysée Treaty signed in 1963 by the far-sighted Chancellor Konrad Adenauer and General de Gaulle, both the Chancellor Angela Merkel and the President Emmanuel Macron renewed and consolidated our bilateral, european and multilateral commitments, enshrined in the Aachen Treaty. Thank you Hon. Minister, as you kindly joined us, all the Ambassadors from the EU in Dhaka, on that day.

Ladies and gentlemen, Turning to our bilateral relations, I would like to stress the warm friendship that has kept growing between our 2 countries, and their leaders, ever since your Liberation War in 1971, when André Malraux supported the fight led by Sheikh Mujibur Rahman. Among a series of bilateral visits illustrating our strong political support, I would like to recall the State visit by the President François Mitterrand, whose entourage (J. Attali, H Védrine…) helped mobilize the international community in the face of catastrophic floods you were facing.

The Honorable Prime Minister, Her Excellency Sheikh Hasina, visited France in December 2017 and had very substantial discussions with the President Macron at the Elysée Palace. Our President expressed our country’s gratitude and appreciation for the generous hosting and protection granted by your Government and people to the more than 740.000 Rohingya refugees who were violently forced to flee their country since August 2017. The President recalled France’s determination in mobilizing the Security Council, in response to what he has described since September 2017 as “ethnic cleansing”, echoing the then High Commissioner for Human Rights.

Along with the United Nations Secretary General, we continue to promote joint efforts to find a lasting solution; a solution which shall be based on the international norms of accountability and justice, as well as on the Right for the Rohingyas who wish to return to Myanmar, to do so in dignified, safe and sustainable conditions. To create the necessary conducive conditions for their return, progress in the implementation of the Kofi Annan-led Commission recommendations is required. Let me mention that France has extended through the UN Agencies and various NGOs some 10 M€ in humanitarian support for the Rohingya refugees in the camps and host communities. Before joining the One Planet Summit which was held that same day, both leaders confirmed their commitment to continuing our cooperation in fighting climate change, as Bangladesh is particularly vulnerable to its increasing impact, building upon our joint efforts ahead of the adoption of the Paris Agreement. Among other issues, they also discussed the growing number of projects aiming at a green and inclusive growth, fully in line with the SDGs and the Agenda 2030, financed by the French Agency for Development. I am pleased to note that the AFD commitments in Bangladesh will reach 600M€ in 2019.

Our President was particularly impressed by the proud presentation H. E. Sheikh Hasina gave him of the rapid growth and diversification of the economy of Bangladesh, allowing for a reduction of the proportion of poverty-stricken population and anticipating on the announcement of the graduation of Bangladesh to middle income country status. They shared their expectations regarding the first satellite of Bangladesh, Bangabandhu 1, which has started its commercial operations in May 2019.

They further reviewed our bilateral trade and its chronic deficit… Let me stress that our exchanges keep on growing (+11%), they reached close to a cumulative 3Bn€ in 2018; ready-made garment count for 90 % of Bangladesh exports. Improving working conditions and diversifying products, you have become the first RMG supplier to France. On the French side, there is an increasing number of companies which supply quality equipments and want to realize high technology projects in Bangladesh, in the sectors of energy traditional and renewables, water, transportation, environmental protection, pharmaceuticals, RMG.. I do not cover all of them, inviting you to see, on this side, the presentation brought by our sponsors.

In the cultural field, our two Alliances Françaises, in Dhaka and Chittagong promote French language and culture in Bangladesh, as well as your country’s culture in France. There have been splendid concerts including for the 1st “Music Day” in Dhaka; theatre with Jyoti Sinha interpreting Beckett’s “Happy Days”; great photo exhibitions, one by Patrick Brown and UNICEF on the “exodus” of Rohingyas. I am not doing justice to all exchanges carried by Bangladeshi and French institutions, NGOs, in archeology, oceanology, medical research, French language, Fine Arts, uniting students, trainers (recently on maths applied to biology!) which not only advance shared knowledge, but also create lasting people to people bonds.

I’ll be leaving Dhaka next week. Allow me two very personal notes : First, I am highly grateful to the Government and people of Bangladesh for the warm welcome I have always been granted, and I am highly appreciative of the resilience and determination you show in all circumstances. BRAVO. Second, I hold the conviction that there is no Sustainable Development without the necessary participation of the population, through Democracy, Rule of Law and Human Rights. It is not one versus the other.

I am also convinced that there is no quick fix to repair damages we cause today to our environment, harming the prospects for the following generations. As Minister Fabius uses to say : “there is not Planet B”, for yourself and out of solidarity, please do your utmost to prevent climate change acceleration, preserve your rivers and country’s lifelines, protect the recycling contribution and wealth of the oceans, the biodiversity, and human species...

I am confident that my successor and our excellent Embassy team will work towards ensuring France’s participation in the celebration of the 100th anniversary of the birth of the Father of your Nation Bangabandhu, in 2020, and of the 50th anniversary of the independence of Bangladesh in 2021.