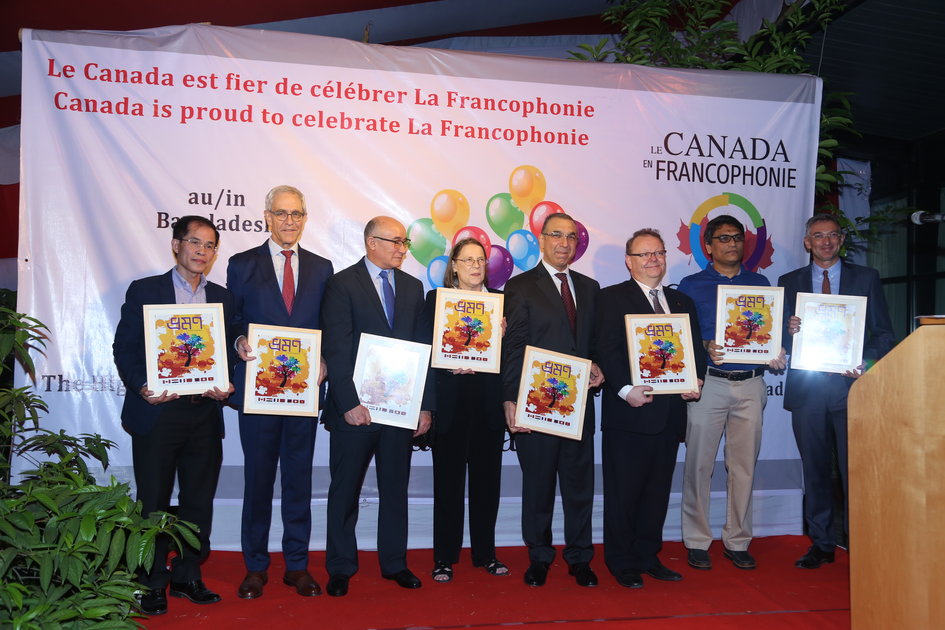 Each year, on March 20th, International Francophonie Day is celebrated throughout the world to promote the shared values of respect for the rule of law and human rights, gender equality, solidarity and cultural diversity and a central place for women, youth and the vulnerable in its work.

Under the slogan “En français… s’il vous plait,” chosen by Secretary General of La Francophonie Louise Mushikiwabo, International Francophonie Day reflects the vitality of the French language, which is constantly being enriched by new words to take into account changes in today’s world.

For the 2019 edition, six diplomatic missions in Dhaka, namely Canada, Egypt, France, Morocco, Switzerland and Vietnam, celebrated the 32nd International Day of La Francophonie with local guests through a friendly and well attended reception at the residence of the Canadian High Commissioner in Dhaka, H.E. Benoit Prefontaine. Along with his colleagues Ambassador of Egypt H.E. Walid Shamseldin, Ambassador of France H.E. Marie-Annick Bourdin, Ambassador of Morocco H.E. Majid Halim, Ambassador of Switzerland H.E. Rene Holstein and Ambassador of Vietnam H.E. Tran Van Khoa, he warmly welcomed his francophone and francophile guests and recalled the work done and values shared by the Francophonie.

In addition to this event, Alliance Française de Dhaka organised a weeklong series of cultural events, including film shows, poster competitions, pétanque tournament, concert and debates as part of the Francophonie week.

Furthermore this year three the 3 Chambers CanCHAM, France Bangladesh Chamber of Commerce and Industry and Switzerland Bangladesh Chamber of Commerce and Industry — jointly launched the ‘2019 Francophonie Week Business Award.’ This year two recipients received an award for their contributions in encouraging and supporting women entrepreneurship development, skill development and promotion of women in the work place. The chambers awarded Razia Sultana Rini of Bornil Fashion House in Pabna for her remarkable efforts to become a successful entrepreneur who started her business in 2016 with Tk 50,000 and MIDAS for its contribution in creating economic opportunities and development of entrepreneurship in Bangladesh since 1982 and advancing women’s rights.