Dear guests, dear Friends, The target of this workshop is to draw your attention on the French speaking area as an area of business opportunities for Bangladeshi businessmen.

1. When the Canadian Chamber of commerce came to us, the Canadian High Commissioner, the Ambassador of Switzerland, saying that they wanted to organize an Economic Francophonie event, we gathered and started to think about the issue. I must recognize that addressing this issue first appeared as a challenge. Because there are two risks :

The first one is to consider our own country separately in order to focus on the bilateral relation between Bangladesh and each of our countries.

The second risk is to consider the Francophone organization as an addition of figures. So my purpose will be to avoid these risks. I would like to focus on the reasons why Bangladesh could consider the French speaking area as a business partner, and how to proceed.

2.First of all, a few worlds on Francophonie. The Francophonie organization, or French speaking organization, was created in 1970. Basically, the initiative came from the Assembly of the French-speaking members of parliament and there is no doubt that, at the time of its creation, this organization was mainly focusing on language, culture and cooperation. This organization gathers together the French speaking countries and countries having integrated the French influence and cultural area. It is a very large organization sharing common values, all defined in the Francophonie charter. Today 57 countries are members of the Francophonie organization ; 32 of them have French as their official language, alone or along with other languages. Others are countries where more than 20% of the population speaks French. The organization also counts 23 “observer” members. Today these 57 countries represent a population of around 270 M people, located first in Africa for more than half of them (53%), then in Europe (37%), in America (8%), and last in Asia (2%). This population is expected to represent 750 M people in 2050. These countries accounted for 18.9% of world exports and 19% of world imports last year.

3.Recently in 2014, the organization decided to adopt an Economic Strategy, on the occasion of its summit in Senegal. This strategy focuses on the willingness to develop an area of fair and friendly-environmental business, respectful for labor work and focusing on creation of added value. The main principles guiding this strategy are responsibility, transparency, healthy management, efficiency of the public administration. The purpose of this strategy is to contribute to the economic development of the country members, in particular through concrete capacity building programs. The goal is to create stable political environments in order to increase investment and business.

4.The 57 countries belonging to the French-Speaking organization are very different countries. Belgium, Canada, France, Luxembourg and Switzerland are the only industrialized countries of this group of 57 countries. Bangladesh knows the industrialized members of the French-Speaking organization : trade between Bangladesh and these countries is important, and it will grow because Bangladesh is in transition, having joined recently the group of the mid-income countries. Bangladesh’s needs and level of consumption will increase, with the progressive development of its infrastructures and the diversification of its industry, and because you have a growing middle class.

But apart from the industrialized French-Speaking countries members of the Francophone organization, there is another important group of countries in this organization : The African one. My purpose will focus on African French speaking countries as my colleagues concentrated on their countries, France, Canada and Switzerland.

5.So now the question is : Why would Bangladesh as an English speaking country be interested in African French Speaking countries, such as Senegal, Ivory Coast, or Guinea for example, from a business point of view ? To answer this question, I would like to ask you : why do you think China has tremendously developed its presence in Africa in the last 30 years ? In Africa, out of Asia, in a continent speaking mainly English, French in addition to the local languages, China is everywhere. From my point of view, the answer could be : Because in Africa land is available, because the soil is rich, because the continent is globally but unequally developed, and therefore because there is a lot to do. Bangladesh could have an interest to look around, starting by considering having a strategy to approach the French-Speaking area.

6.Considering this point, the idea came to me that France can be a bridge between African French speaking countries and Bangladesh. And I am not the only one to have this idea : In Norway for example, 8th of March this year in Oslo, the French Norway Chamber of commerce and industry organized with the Norwegian-African Business Association a seminar to highlight business opportunities in Africa through French-Norwegian collaboration. There is nothing common between Norway and Africa. But the initiative taken by the French chamber there can open the door to new perspectives.

In France, we have many organizations working very closely with their African partners. These organizations can play a key role in order to develop new strategies towards Africa, and it is important to know about them. I would like to mention one of them, the French Council of Investors in Africa, CIAN. More than 150 French companies are members of this association of investors in Africa. Another example is the French high business school HEC. HEC has developed a network of African decision makers. HEC is present in 12 African French Speaking countries. In most of them, HEC has created HEC Executive Clubs. Decision makers of these countries are part of these clubs. Here in Bangladesh in North-South University, for many years, NSU is sending students to our French High Business School, HEC, and some teachers of NSU are former students of HEC. This means that there is a possibility to create the link between Africa and Bangladesh through the French High Business School HEC. Here in Bangladesh perhaps you know that the Conference of Islamic states is supporting scholarships for African students at the Islamic University of Technology. This means that you have the opportunity to get in touch with young African students who will know you and who know Bangladesh, as well as they know France and of course they know their country. These young students are the new generation of Africans, and there it is easy for you to get in touch with them, as they are here. It happens to me to receive contact mails from Africans or from French people working in France with African countries. They are contacting me because they consider that, being here, I can create the link between where they are and Bangladesh, which are two areas of opportunity.

7. As a conclusion, I would say that Bangladesh could have a real interest in considering diversification of its “traditional” business partners. French-Speaking countries of the Francophone organization in general and African French-Speaking countries in particular are new markets to address and I would say that the key factor is to identify the doors opening onto this part of the world.

France is known to Bangladesh and France is in a good position to be considered as a Bridge towards African French speaking countries, because as said before, the channels do exist towards these countries, in France and here in Bangladesh, for example through the African students. The Embassy can create the link.

8.To illustrate my purpose, I would like to mention that in April, the French Embassy will launch a platform called Alumni. This platform is a virtual network gathering non-French students having studied in France, or speaking French all over the world. This platform is a useful tool for companies to identify adequate profiles within the framework of a strategy aiming at developing business opportunities with the French-Speaking world. I thank you for your attention./. 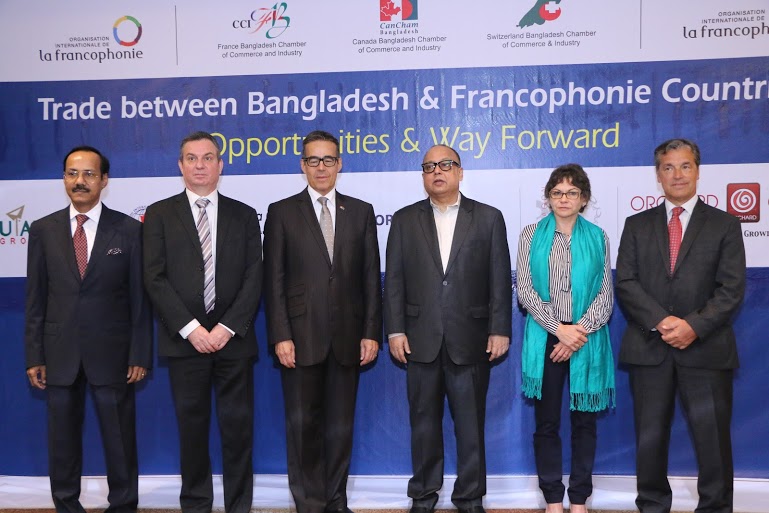