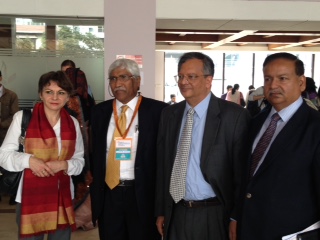 Speech of the Ambassador of France in Bangladesh

This is a great honor for me to be here, as representative of my country, to share with you the vision France has developed to climate changes, and the expectations of the 21st International Climate Conference, that will take place in Paris in December, 2015. Most of us now know what International Panel of Climate Change means. IPCC, for many years, has alerted on the important impacts climate changes would have on the world, and on our ways of living.

Now, nobody can honestly doubts that these impacts will be real and visible, and for countries like Bangladesh, are even now here : they are part of the Bangladeshi people lives.

French Foreign Minister Mr. Laurent Fabius said in Paris, as he was welcoming the fifth IPCC report, that skepticism was not acceptable, fatalism was dangerous, and voluntarism was necessary.

I believe in these words.

Now scientifically, there is no doubt that climate disruption has increased. There is a direct link between what we do on the one hand, and greenhouse gas emissions and increase of the global temperature of the world on the other hand.

At the same time, we can’t just say : ok, something is happening, but what can we do ? It would be a big mistake, because if we don’t act, global temperature could increase from 3 to 6 degrees before the end of this century.

This means that disasters will occur, stronger and more frequently. Here in Bangladesh, you know very well what I mean. I mean disappearance of places to live in, I mean lack of food safety, I mean big challenges for health and sanitarian issues.

In a few words, I mean that our future is engaged.

That is why we have no option but to be optimistic.

My country is honored to have been designated by the international community to welcome the 2Ist Climate Conference in Paris.

We, France, consider that it’s still possible to limit temperature increase to two degrees by the end of the century, under the condition that greenhouse gas emissions be limited, from 40% to 70 %, between 2010 and 2050.

But we have to react and to act rapidly, because the more we are late in taking measures, the more it will cost to the global society.

That’s why we have to face our responsibilities.

COP20 took place in Lima, in December 2014. It was a very important step before Paris Conference. I will not go through the details of this conference, because you know them much better than I do.

But my understanding is that Lima should help go positively to Paris, even if we can regret that too many points have been left aside. One important advance is the progress made in the definition of the method according to which Intended National Determined Contributions should be presented.

We are realistic and we know that globally, the results of Lima Conference could have been better.

But what is true is that more and more countries are now aware that we have no way but to face climate challenges together. Because the very fact is that the situation has become more and more dangerous for the whole planet.

The European Union has decided to reduce greenhouse gas emissions. USA and China have also proposed to reduce their emissions. These decisions are going to the good direction and they should encourage other countries to go forward. Now Paris conference will have four challenges :

• First of all, to find a legally binding agreement, so that each country commits itself to limiting temperature increase below the two degrees ;

• Second, to obtain national involvements in order to decarbonate national economies by 2020 and besides. It’s a big issue to address, but it’s necessary ;

• And fourth, we will try to examine, in Paris, how big cities, regions and even big companies, I mean the whole civil society, can contribute to solutions in order to find an adequate response to climate changes.

NGOs and think tanks, as you are, are essential to convince Governments to involve themselves, on behalf of the future generations. Because there is no alternative if we want to save the planet.

I am confident that this seminar will help Bangladesh find appropriate solutions not only to adapt its activity to climate changes, but also to find ways to mitigate climate disruption.

I wish you a good work.