Dhaka WASA signed a contract with a consortium of French enterprises SUEZ and VEOLIA to supply drinking water to Dhaka : Gandharbpur Water Treatment Plant Design Build Operate contract, on 16 May 2018 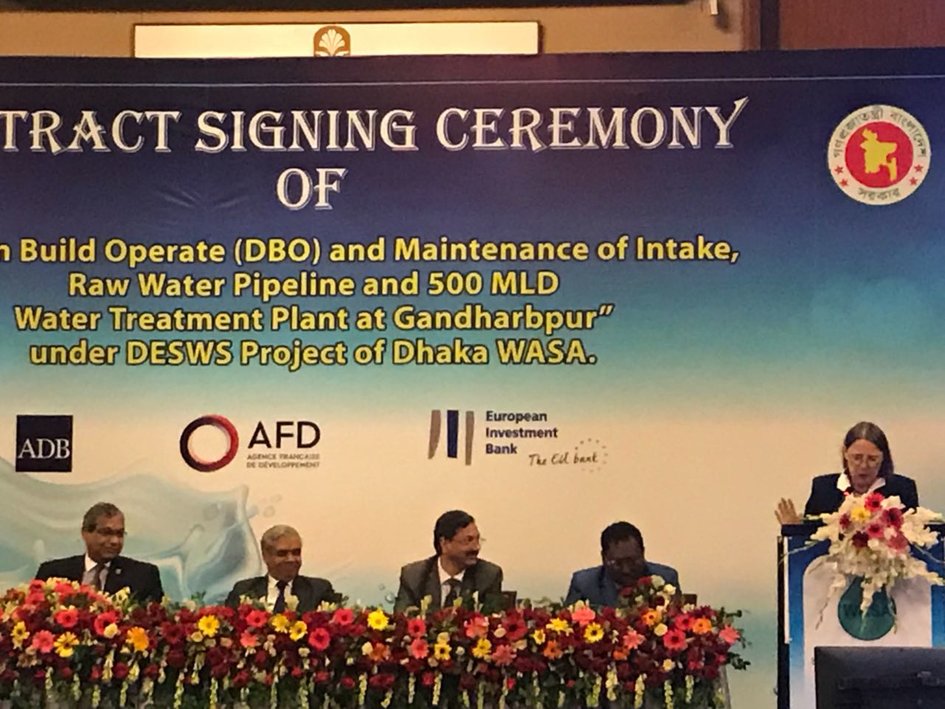 On 16th May, was held the contract signing ceremony for the Design Build Operate (DBO) Package of Gandharbpur Water Treatment Plant, that will produce 500 000 m3 of potable water daily, after its completion in 2021. It will provide drinking water to 4,3 million Dhaka residents.

Two French companies, SUEZ and VEOLIA, representing the well established French excellence in the water sector, around the world, and in Bangladesh since the 1990es, have formed a joint venture to respond to the call for tenders for this ambitious and technically challenging project.

The 275M€ contract includes the designing, construction and operation of a water drinking production plant, based on a raw surface water intake in the Meghna river (to drastically limit the depletion of the groundwater tables), a water pipeline, and the construction of a water treatment plant in Gandharbpur. The contract provides for a 4 year plant design and construction phase, to be followed by the operation and maintenance of the plant for a 3 year period, along with the progressive transfer of know-how to the Dhaka WASA staff.

Engr. Taqsem A Khan of Dhaka WASA and Mr. Pierre-Yves POULIQUEN (SUEZ) and Laurent NUGIER (VEOLIA) representatives of the joint venture SUEZ-VEOLIA as equal partners for the realization of the Ghandharbpur Water Treatment signed the contract on their respective part. The treatment plant is being implemented under the project “Dhaka Environmentally Sustainable Water Supply Project” (DESWSP), funded by the Asian Development Bank (ADB), French Development Agency (AFD) and European Investment Bank (EIB).