Communiqué issued by the Presidency of the Republic (Paris - December 3, 2020) 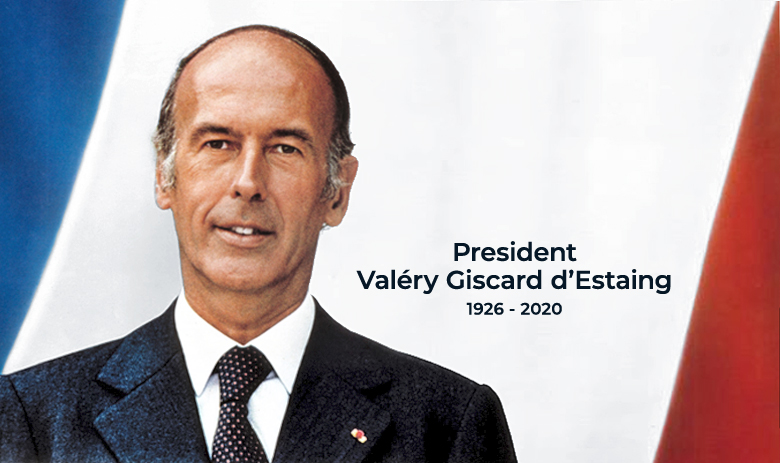 Valéry Giscard d’Estaing, third president of the Fifth Republic, passed away on Wednesday, December 2, at the age of 94, after a whole life devoted to serving the French people.

This great servant of the State was an inspector of finance, mayor, National Assembly deputy, MEP, minister, regional president, member of the Constitutional Council, academician and French President. He therefore worked in the public interest for 65 years, at every level of the nation. He served France in whatever capacity he could.

At the age of 18, an outstanding student, he did not hesitate to interrupt his studies to put France’s destiny above his own. Weapons in hand, he took part in the liberation of Paris, joined France’s First Army and distinguished himself through bravery in combat, earning himself the Croix de Guerre.

Having studied at the Ecole Polytechnique and the Ecole Nationale d’Administration, he became a talented senior civil servant dedicated to his country’s administration. As a minister for 12 years under the presidencies of Charles de Gaulle and Georges Pompidou, he helped stabilize the public finances and develop France’s economy during the “Glorious Thirty” years of post-war growth. A fervent champion of monetary stability and fiscal balance, he also worked on the country’s policy of energy independence.

Valéry Giscard d’Estaing was also a committed politician capable of persuading French people through his dynamism and vision. He was still less than 30 years old when he became deputy head of the private office of Prime Minister Edgar Faure, and then, for many of the next 20 years, National Assembly deputy for Puy-de-Dôme. In 1966 he founded the Independent Republicans – creating a reformist, centrist, pro-European movement which was to play a growing role as mediator within the right-wing majority – before becoming mayor of Chamalières the following year. His energy and effective track record both nationally and locally made him one of the favorites to succeed Georges Pompidou when the latter died.

So it was that Valéry Giscard d’Estaing became French President. On May 19, 1974, after what in many respects was an unprecedented media campaign, he won the election at the age of 48. His presidency was an intense period of reforms. The man now known as VGE, or simply Giscard, managed to modernize the position of head of State and “look France deep in the eyes”. His seven-year term transformed France. He enabled young people to vote when they turned 18, women to legally terminate unwanted pregnancies, couples to divorce by mutual consent, and disabled people to secure new rights. He worked for a stronger Europe and a more united Franco-German partnership, and helped stabilize international political and economic life by founding the G7.

On leaving the Elysée Palace, Valéry Giscard d’Estaing promised to remain committed alongside the French people. It was less a “goodbye” than a “see you soon”. Re-elected to the National Assembly, he led the centrist opposition as leader of the UDF, before moving closer to the right. Then, returning to his Auvergne roots, he worked to open up his region and bring its heritage to the fore, as head of the Regional Council. An ex officio member of the Constitutional Council, where he held a seat from 2004 onwards, he continued well beyond his seven-year term to shape our political and institutional life, as well as our daily existence.

Finally, Valéry Giscard d’Estaing was a man of letters, his guiding lights Maupassant and Baudelaire. Author of essays, novels and memoirs, he was elected to the Académie française in 2003 and never stopped cultivating his love of our language.

The precepts he set for France still guide our steps. A servant of the State and a politician of progress and freedom, his death leaves the French nation in mourning. President Macron and his wife express their most heartfelt condolences to his wife, children and other loved ones, to the people of Auvergne, to those inspired to follow in his footsteps and take up his ideas, and to all French people.