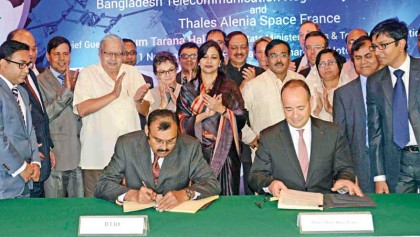 The Bangladesh Telecommunication and Regulatory Commission (BTRC) has signed a Tk 1951.75 crore deal with French company ThalesAlenia Space to procure equipment for the country’s first-ever satellite project Bangabandhu-1. Shahjahan Mahmood, chairman of BTRC, and Jean-Loic Galle, chairman and chief executive officer of the ThalesAlenia Space, inked the deal from their respective sides at a ceremony held at a hotel in the capital on Wednesday. State Minister for Posts and Telecommunications Tarana Halim was present as the chief guest at the signing ceremony while Imran Ahmed MP, president of the Parliamentary standing committee on Posts and Telecommunications was present as a special guest. As per the agreement, the ThalesAlenia Space will manufacture, launch and maintain the satellite for providing communication and broadcast services. The firm will get 24 months time to launch the satellite. The government has a plan to launch the satellite on December 16 on the occasion of the 45th anniversary of the country’s victory in the Liberation War. Manufacturing and other necessary works are going to start on December 16 next. Speaking on the occasion, Tarana Halim said: “This contract is the final step towards fulfilling our long-cherished dream of launching the first satellite of Bangladesh ‘Bangabandhu Satellite-1”. French Ambassador Sophie Aubert was present at the programme with Posts and Telecommunications Division Secretary Faizur Rahman Chowdhury. Officials of Posts and Telecommunications Division, said the government has selected ThalesAlenia Space for handling the satellite as per the recommendation made by the telecom regulator after scrutinising its financial and technical proposals. Earlier, four companies—Great Wall Industries Corporation of China, ThalesAlenia Space of France, Orbital ATK of the United States, and MDA Corporation of Canada - had participated in the international tender called by the BTRC. Earlier on October 20, the cabinet committee on government purchase approved the tender proposal in favour of Thales for the satellite which will be used for telecommunication and broadcast purposes, as all other participants became non-responsive during the bidding process. Officials said MDA Corporation became the lowest bidder with US$ 22 crore while ThalesAlenia proposed US$ 24.80 crore. But, the telecom regulator selected ThalesAlenia which came up with much better technical specifications than MDA Corporation. Officials familiar with the launching process said a satellite is sent into space on top of a rocket. Aimed at averting any kind of risk, Bangladesh has decided to keep ready a spare rocket for the launch that may increase the cost slightly. Bangladesh will be the 54th country when the satellite would be launched into the orbital slot on 119.1 degrees east longitude, which (slot) was bought from a Russian satellite company “Intersputnik” for US$ 28 million this year. The Bangabandhu satellite will have 40 transponders, which would be able to serve SAARC countries, Indonesia, and the Philippines, as well as countries such as Turkmenistan, Kyrgyzstan and Tajikistan. One transponder is equivalent to 36 MHz. Under the project, two earth stations would be set up at Joydevpur in Gazipur and Betbunia in Rangamati apart from a satellite. Bangladesh spends around US$ 14 million annually on satellite rents for running television channels, telephones and radio connectivity. Once launched, the satellite would save around Taka 110 to Taka 120 crore annually in foreign currency as broadcasting expenditure.